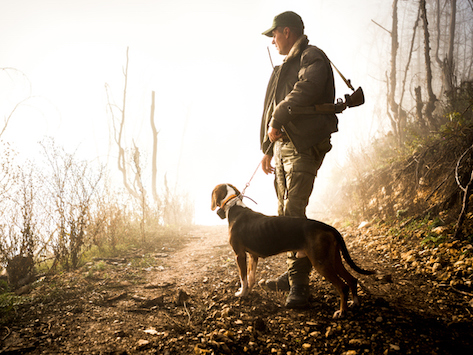 When it comes to gun ownership, safety is of the utmost importance. Gun owners must take careful precautions to ensure that loved ones are kept out of harm’s way. These precautions don’t just extend to human members of a household—pets should also be kept in mind when practicing responsible firearm habits.

“First and foremost, firearms should always be treated with respect,” says Dr. Michael Moss, a veterinarian at Central Pennsylvania Veterinary Emergency Treatment Services in State College, Pennsylvania. “Treat all guns as if they’re loaded, even if you are certain that they are not. And never—NEVER—point them at another person or pet.”

Preventing firearm-related accidents requires that gun owners exercise restraint when on hunting excursions. “This sounds like common sense, but never shoot in the direction of a dog—or person, for that matter—that’s in cover,” Moss says. “You might not be able to see the dog, but that doesn’t mean you won’t accidentally shoot him.”

Moss is a hunter himself. When he’s on hunting trips, he always tells his companions that no game is worth unsafe shooting practices. “If you don’t have a safe shot, let it go,” he says. “There will always be another chance.”

If you want to hunt with your dog, Dr. Daniel Inman, a veterinarian at Burlington Emergency Veterinary Specialists in Williston, Vermont, suggests outfitting your pup with a bright orange vest. “It’s the best way to ensure your dog doesn’t get mistaken for game,” he says.

Moss’s foremost recommendation is to never bring a loaded gun into your house. “They should always be unloaded before they come indoors,” he says. Once the gun is inside, it should be locked up somewhere safe. The same goes for ammunition. “Pets are curious,” he says. “Especially dogs. They’ll eat almost anything, even cartridges. Dogs are very bright animals, but sometimes even the brightest dog does something stupid.”

Inman adds that while pets cannot pick up a gun and fire it like a child might, they can knock it off a table if it’s left unattended and cause it to accidentally discharge. “Animals are very unpredictable,” he says. “They can jump on you without warning, or decide to explore an area they’ve never expressed an interest in before. For these reasons, it’s definitely best to keep animals and firearms separated.”

Both Moss and Inman say that the very first thing gun owners should do when cleaning their firearms is to check that the gun is not loaded. Then, they should check again. “I’ve seen several cases in which gun owners accidentally injure their pets because they didn’t know their guns were loaded when they were cleaning them,” Inman says.

Moss concurs. “I have read so many articles about people who have firearm accidents when cleaning a loaded gun,” he says. “Always check to make sure a firearm is unloaded before handling it in this way.”

And, once a gun owner commences cleaning her firearm, she must be careful that she doesn’t accidentally point it at her pet. “Remember, pets exist on a lower plane than people. If you point a gun at the floor when you’re cleaning it, you may think you’re being safe, but that is where your pet is,” Inman says. To ensure everyone’s safety, he recommends that pets be kept in a separate room when firearms are out and being cleaned.

Inman adds that a lot of the solutions used to clean guns may be caustic, making them extremely dangerous if pets were to ingest them. “Caustic solvents serve a purpose, which is to break up dirt and debris. Beyond being poisonous, if swallowed, these solvents can cause irritation and inflammation to an animal’s esophagus and stomach. This means that if a dog or cat swallows them, you don’t want to induce vomiting because it could cause serious damage the esophagus.”

Inman reiterates that pets, firearms, and firearm cleaning products should be kept separate to avoid any issues. However, if a pet does manage to eat some cleaning product, Inman first suggests learning what the active ingredient is in that product, and then reaching out to poison control for further guidance. “Some products may only cause some minor gastrointestinal upset. Others may require IV fluids and supportive care,” he says. “You have to figure out what you’re dealing with before taking action.”