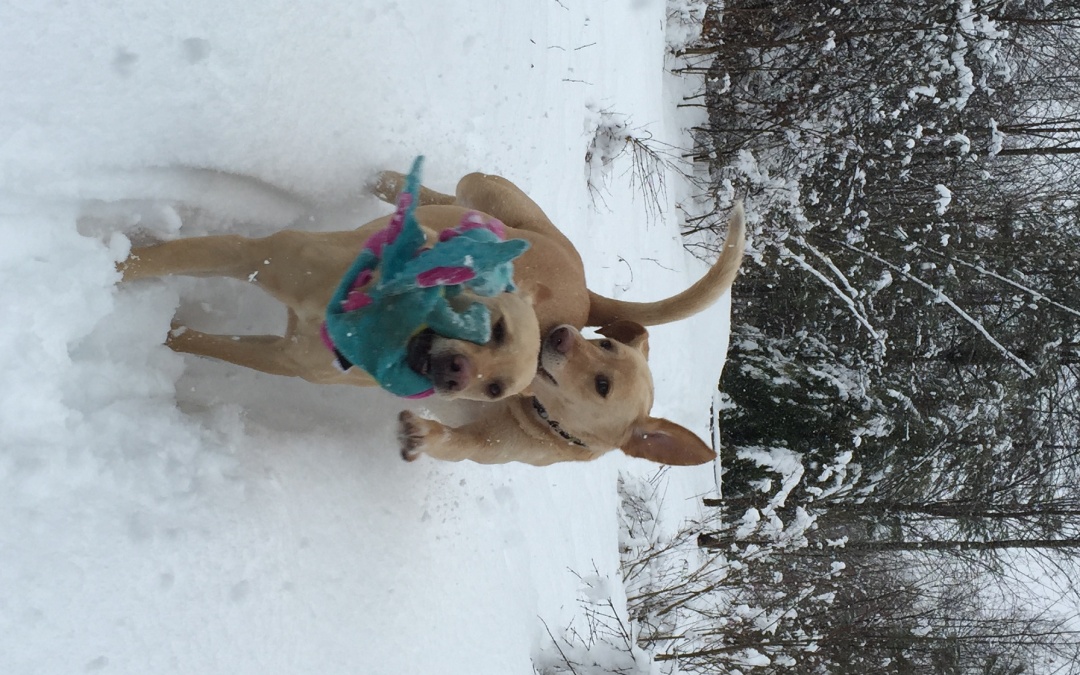 As the winter approaches and the snow falls on the mountains, we look forward to spending time outside with our dogs. Whether you enjoy Alpine or Nordic skiing, injuries – in both us and our best friends are not unusual.

Cranial cruciate ligament disease can affect dogs of all sizes, breeds, and age.  Rottweiler, Newfoundland, Staffordshire Terrier, Mastiff, Akita, Saint Bernard, Chesapeake Bay Retriever, and Labrador Retriever breeds have a higher incidence.  Poor physical body condition and excessive body weight are risk factors for cranial cruciate ligament rupture.  Simply an athletic dog landing “wrong” when running or jumping in the snow or on ice or a collision with a person or another dog could result in a traumatic cranial cruciate ligament rupture.  Consistent physical conditioning with regular activity and monitoring of food intake to maintain lean body weight are factors within our control that can help prevent some of these injuries.

Dogs typically present to the veterinarian with either an acute or chronic history of weight bearing to nonweight bearing lameness (limping) of the hind leg.  A thorough history and physical examination is needed to diagnose an ACL tear.  Gait analysis and good palpation is required to localize the area of injury and determine if it is caused by orthopedic or neurologic disease.  A cranial cruciate ligament rupture will cause instability (“cranial drawer sign” and “positive tibial compression test”) of the knee joint on palpation.  Radiographs (x-rays) of the knee will often reveal joint effusion (“water on the knee”) and cranial or forward displacement of the tibia (“shin bone”), but can also evaluate the degree of arthritis present.

Depeding on the amount of instability and physical examination findings, it is possible to differentiate between a partial and a complete cranial cruciate ligament rupture.  Surgical stabilization of the knee joint is the gold standard and the best treatment for a complete cranial cruciate ligament rupture.  Surgery is the only way to permanently control the instability present in the knee joint as it addresses knee instability and eliminates the pain.  The goal of surgery is not to “repair” the cranial cruciate ligament itself with a graft unlike in human knee surgery.  Due to biological and mechanical influences, the cranial cruciate ligament has no ability to heal once tearing begins regardless of the degree of severity.  There are a number of surgical techniques available today.  The most common techniques include Extracapsular, Tibial Plateau Leveling Osteotomy (“TPLO”), and Tibial Tuberosity Advancement (“TTA”).  In addition, minimally invasive arthroscopic surgery (often performed by board certified veterinary surgeons) and evaluation of the knee joint (as performed in people) will allow for a faster recovery and use of the leg postoperative.  A description of the common surgical techniques can be discussed with your primary veterinarian in order to make a decision which is best for your dogs size, activity level, age, skeletal conformation, and degree of knee instability.

Premature uncontrolled or excessive activities risk complete or partial failure of any surgical repair and healing process.  Proper postoperative care will be explained to you in detail by your dog’s surgeon before and after surgery.  As with people, physical rehabilitation can speed your dog’s recovery and improve final outcome.  Rehabilitation should start immediately and usually includes passive range of motion, balance exercises, laser treatment, and controlled leash walks.  Long term prognosis for animals for surgical repair of a cranial cruciate ligament rupture is excellent.

Enjoy the winter season and be safe when you hit the mountains and backcountry with your four legged companion.