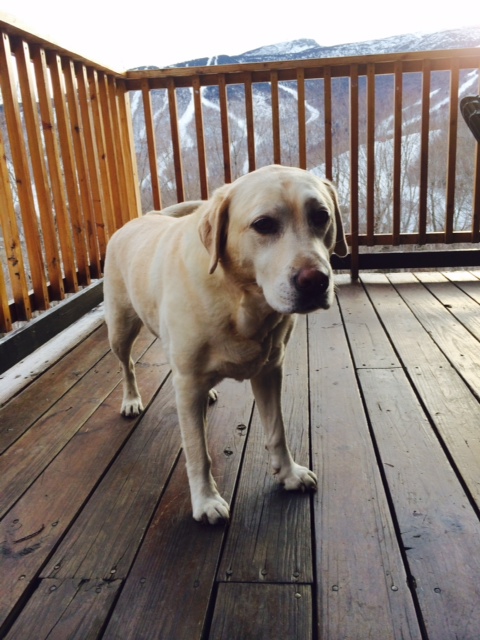 Mala Boo is a beautiful, adventurous 8 year old Labrador. One day last October after returning from a  hike she began showing signs of neck pain. The neck pain became more severe and progressed to tetraparesis (unable to walk and very little movement of her 4 limbs). At BEVS she underwent a neurologic examination and CT scan showing a slipped disc (intervertebral disc disease), compressing the spinal cord at C5-C6 on her neck. Mala Boo’s amazing family decided to go through with surgery knowing a long road and tough recovery was ahead of them. The same day as the exam and CT, Mala Boo underwent a ventral slot (bone tunnel made on the spinal canal floor to retrieve the disc material compressing the spinal cord). Mala Boo was kept sedated and received different types of pain medication to control what we call wind up pain – a pain that persists even after the insult has been removed.

One of the most extraordinary moments in my career occurred 2 days post surgery while the owners were visiting.  Mala  Boo was still very painful and unable to move. We were going over all of the options and that prognosis can be good but recovery is long and difficult. At that moment, Mala moved her front limb for the first time since she became tetraparetic, and reached for her owner. At that moment, they said, we are going to continue, Mala deserves that support. After that, slow improvements could be observed daily. Mala would be able to hold her head up for few minutes which progressed to her moving her legs more vigorously and wagging her tail. Five days after surgery, Mala was discharged from the hospital, still unable to walk and on several pain medications. Mala’s mom Micheline cared for Mala every day, giving her pain medications, doing her home exercises, expressing her bladder and carrying her outside. Again, Mala showed daily improvements and 2 weeks after surgery, she was be able to stand with very little support and did not show any more signs of pain. The Vanovac family continued her exercises at home, holding her up for balancing exercises, doing range of motion, stimulating Mala to move with treats – luckily Mala Boo loves her treats! Five weeks after surgery, Mala could walk on her own and was enjoying the snow outside. What initially was a slow walk with some paw placing mistakes, gradually became a normal walk and finally Mala Boo (and her family) got her life back. Mala Book and her family have many more hikes ahead of them. 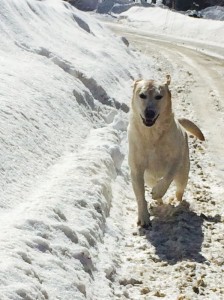