This past September I made the difficult yet exciting decision to leave the safe familiar confines of BEVS to embark on a 5-week Rotary International Group Study Exchange (GSE) trip to South Africa.  I had the privilege of traveling to rural places in South Africa including Viljoenskroon, Welkom, Ladybrand, Bloemfontein, Colesberg, Queenstown, Grahamstown, Port Elizabeth, and Johannesburg.  I stayed with amazing host families, including fittingly enough, a retired veterinarian and his wife.  Our hosts immersed us in their projects, showed us around their towns and adopted us into their families.  They are a group of individuals who I will not soon forget!

I discovered that a number of veterinarians take an afternoon siesta and close up shop.  Unfortunately, for me, I had no control over my schedule and in two of my towns, this was my vocational day!  Not to fear, being a well-trained, productive BEVS’ employee I occupied every minute of that time by asking an arsenal of questions about how their patient load, procedure, and medication protocols differed from ours back home. Eighty five percent of these rural practices lack skilled veterinary nurses/technicians leaving most of the patient care to the doctors.

I had the pleasure of meeting and working with Dr. Gavin Rous in Colesberg, who will be the veterinarian for the equine endurance rides in the 2012 Olympics!  He and his wife Charmy are both veterinarians and they do their best to care for the town’s pets and that of the surrounding township.  After traveling around with them for a day and seeing the horrific state of these township animals first hand I see a need to organize a rotary/veterinary supply venture from home for that area with Drs. Rous.  There is so much that could be done with a little funding and some basic supplies. 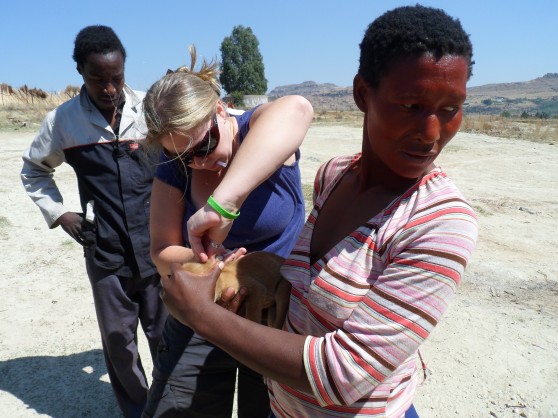 While in Ladybrand, my group stayed the night at a Rotarian’s lodge – Franshoek Farm.  I stumbled across one of the state veterinary nurses in the village (the state veterinary nurses have a license to work on their own) performing a free Rabies vaccination clinic.  I immediately asked if I could stay and assist him.  He asked if I could vaccinate, of course!  The instructions were simple: he did the paperwork, I vaccinated; one needle per five patients.  I vaccinated 25 dogs and 3 cats (in bags) against Rabies, which runs rampant in parts of South Africa.  This was the pivotal South African veterinary experience, which I had dreamed of, using my skills to help in this developing country and make a difference.  There was nowhere in the world I would have rather been at that moment.

The final vocational day of my trip was with the captive breeding program in Bloemfontein called the Cheetah Experience.  Volunteers from all over the world work towards preserving the cheetah population and numerous other African species.  I had the chance to pet a cheetah and lion!  As amazing as that visit was, the Grahamstown club rivaled it by getting me behind the scenes of the Shamwari Game Reserve and the Born Free Foundation.  The Born Free Foundation (named after the movie/book) is one of many rescue sanctuaries that exist across the globe to rescue, rehabilitate and provide life-long medical and housing care to neglected, abandoned, and abused wildlife.  This particular Born Free Foundation specializes in large cats.  They currently house ten lions and seven leopards (three of which are a larger Somali species) at their two campsites.  Wedged between these two sites lies the Shamwari Game Reserve, which is the largest reserve of its kind.  It is also one of the most exclusive resort destinations (Brad Pitt and many other stars stay there).  While driving between the two sites we came upon a herd of giraffes, zebra and springbok at a large watering hole.  Signs warned not to leave the vehicle, as there were lions on the loose. I chuckled. If there was any doubt before I was truly in South Africa!  At the second camp site I played chase with a 4 year-old lioness named “Marina” (behind the fence of course).  Back at the Shamwari Hospital, I fed three baby Springbok, baby hippo, baby giraffe, and six baby jackals and now I know the formula make-ups for each.

I will truly miss all of my new friends and adopted families and hope one day to return.  If you ever get the opportunity to explore South Africa, there is no doubt you will fall in love with this place just as I did!